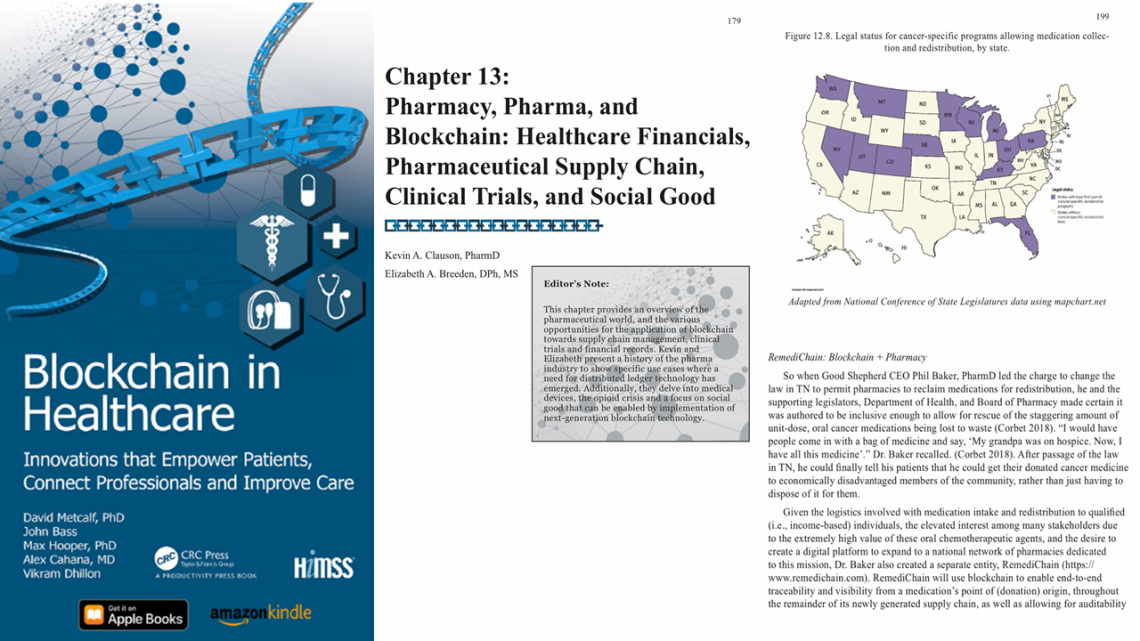 Last year I joined an unparalleled group of domain experts to help author the HIMSS-produced book Blockchain in Healthcare: Innovations that Empower Patients, Connect Professionals and Improve Care. I was honored to be invited to contribute the chapter on blockchain and pharmacy alongside my colleague Beth Breeden from Lipscomb University College of Pharmacy & Health Sciences in Nashville, TN. The print edition of the book debuted at the HIMSS19 conference in Orlando, FL, and the e-version has since been released on Amazon Kindle and Apple Books.

We divided our chapter into four subsections:

This chapter also details a few use cases including an interesting, albeit early, proposed approach by ConsenSys on using distributed ledger technology (DLT) for combating a few elements of the opioid crisis.

If you are interested in the intersection of of healthcare and blockchain/DLT, I can’t think of a better place to start than this text! 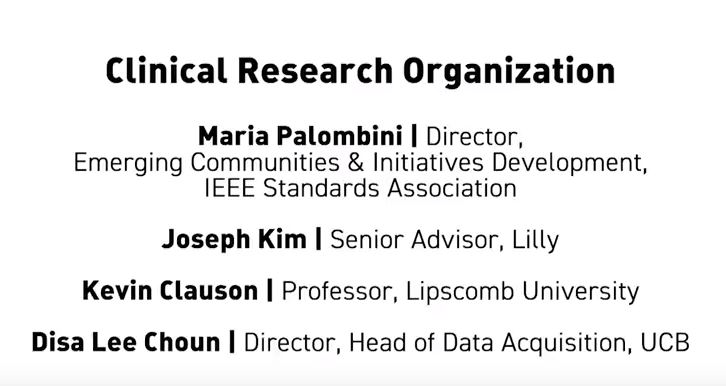 While not quite Fantasy Island, I recently enjoyed a trip to Hilton Head Island, South Carolina where I stayed…at a Marriott. Turns out the island is named after Captain William Hilton. No relation to the Marriott International, Inc (formerly Hot Shoppes!) folks. I was there for the 2015 Annual Meeting of the South Carolina Society of Health-System Pharmacists to speak about the emerging area of wearable technology in pharmacy. It was a nice, tightly run conference with good speakers and active attendees.

END_OF_DOCUMENT_TOKEN_TO_BE_REPLACED 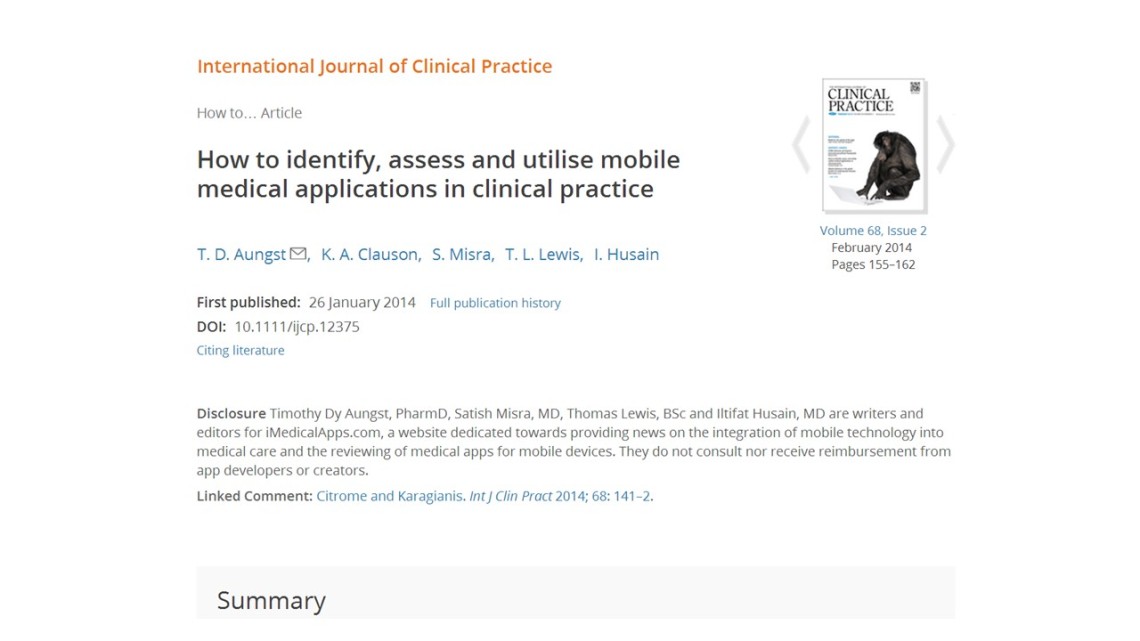 Recently I was invited to participate on an article by some of the fine folks at iMedicalApps. While I had done some things with them in the past dating back to a guest post in 2011, including providing early coverage of Medicine 2.0 @ Stanford, I had never collaborated with them on a conventional journal article. In this case, the effort was led by fellow pharmacist Timothy Aungst, PharmD as part of his efforts to bring a stronger eye of assessment to the unsettled world of medical apps. This particular effort yielded the article, “How to identify, assess and utilise mobile medical applications in clinical practice”, which was published in the International Journal of Clinical Practice. The aim of the article is basically outlined in the title. This was to be a practical paper for a clinician audience highlighting key aspects of the steps for: 1) identifying, 2) assessing, and 3) using medical apps. I believe a good paper came out of this collaboration and it certainly sparked the most creatively titled editorial comment (Battle for the Planet of the Apps). 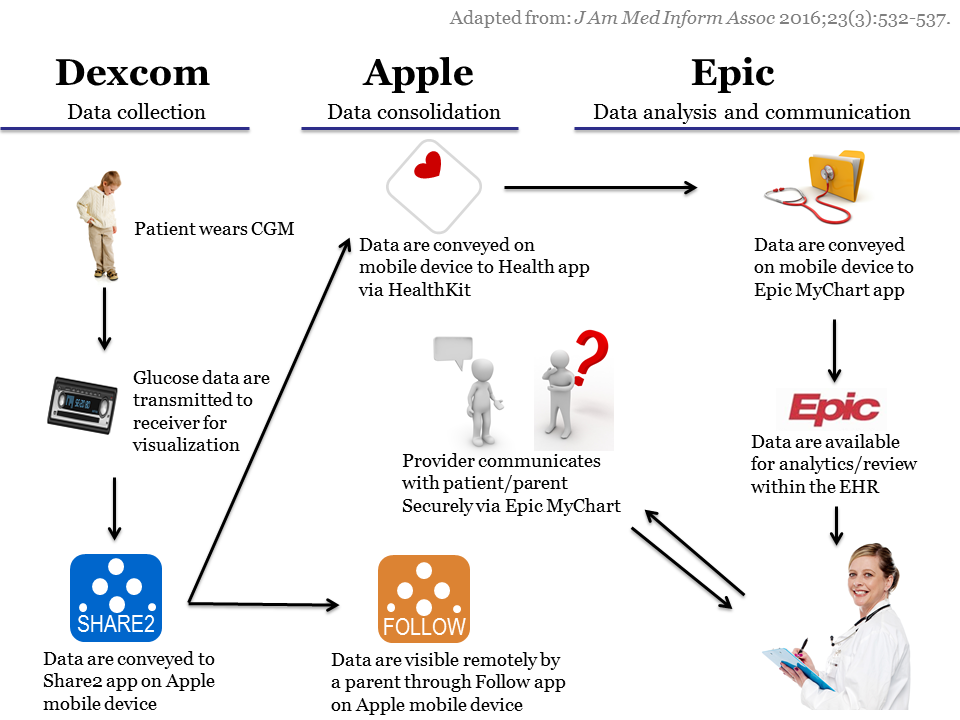 On a recent trip to Indianapolis I was able to take part in the annual meeting of the American Association of Diabetes Educators (AADE) and share a bit about the digital health space as it relates to the role of diabetes educators and patient care.

A summary of my presentation published in The American Journal of Managed Care Evidence-Based Diabetes Management, written by Mary Caffrey as part of her coverage of AADE appears below and can be accessed in full here. 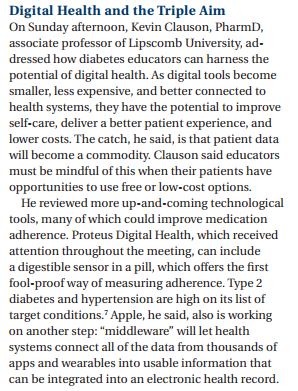 AADE 2017 was an extremely well-organized conference that made great strides in the digital health arena this year, highlighted by Chris Bergstrom’s session “Let’s Get Digital”.
@kevinclauson 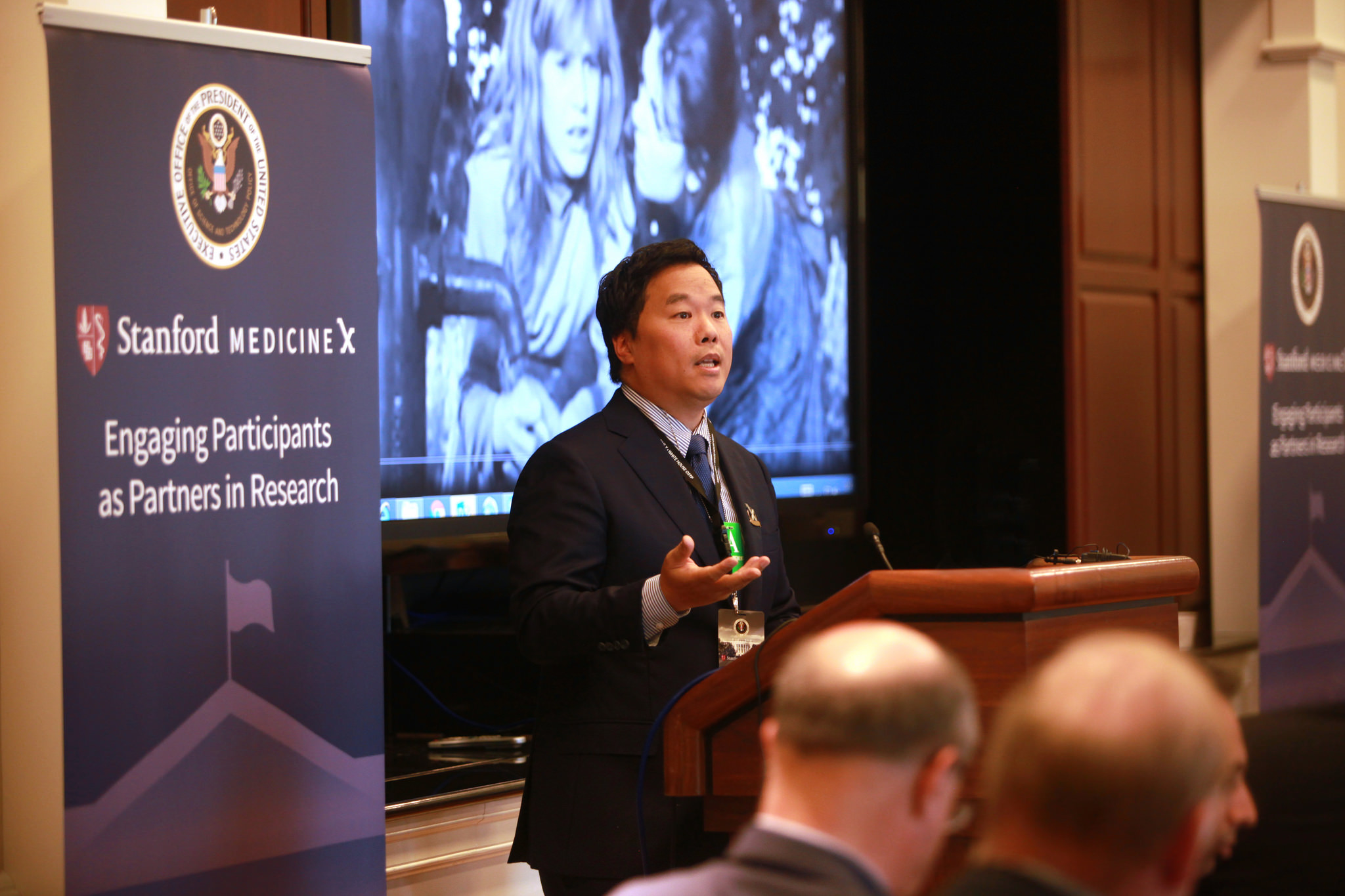 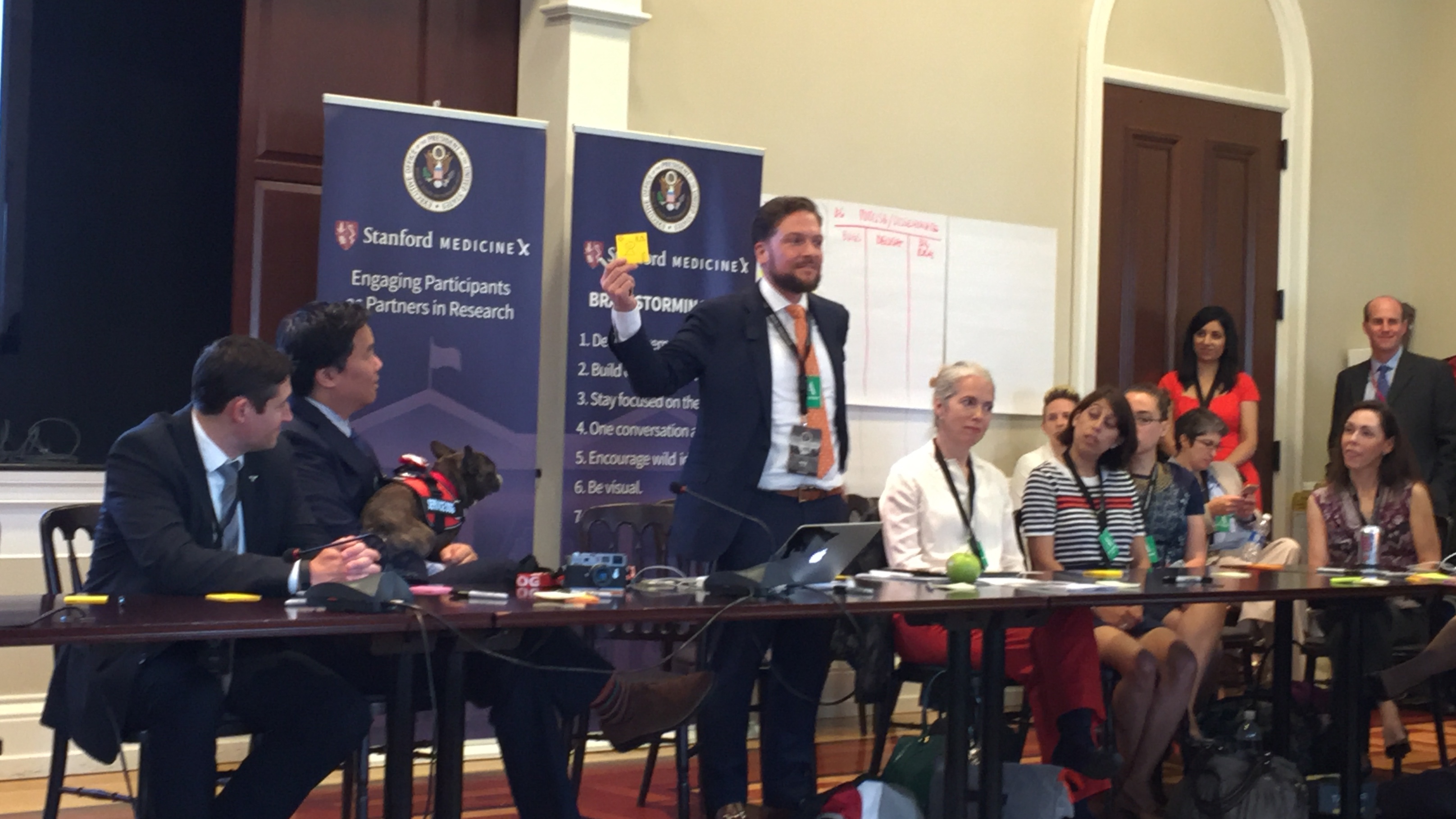 END_OF_DOCUMENT_TOKEN_TO_BE_REPLACED

The Infusion Nurses Society asked me to speak about the use of social media and patient education at their INS Annual Meeting (#INS2016). This year INS Annual was held in Ft. Lauderdale, FL. I have not had many opportunities to return to the Sunshine State since I relocated to Nashville two years ago, so I was looking forward to this conference on several fronts.

I was able to attend some of the other sessions and speak with attendees and presenters. Infusion nursing is not an area I have expertise in, so essentially everything I saw and heard was a good learning experience. I also learned a modest, but thoughtful thank you gift with a handwritten note for speakers still means a lot. Nicely done INS!

Over the last two years I have been fortunate to work with some real leaders in pharmacy informatics education. One of the most accomplished pioneers in this realm is Dr. Beth Breeden, who is the Director of the Master of Health Care Informatics (MHCI) program at the Lipscomb University College of Pharmacy and Health Sciences in Nashville, TN. Pharmacy students at our University have a rare set of opportunities in informatics education, including a dual pharmacy-informatics program that is the second of its kind in the country. Pharmacy students can choose to concurrently complete a dual PharmD+MHCI or PharmD+Certificate in HCI. We also offer both summer internships and a specialty residency in partnership with Vanderbilt University focused on pharmacy informatics as well as related experiential and research opportunities to our students. It doesn’t hurt that Nashville has evolved into the health care capital of the country. But creating these types of health care informatics opportunities for pharmacy students is a challenge nationally for pharmacy and other health care educators, which is why the article described below was written. Hopefully the framework presented and specific examples described help educators working in even the most resource-challenged environs develop informatics opportunities for their students.

Standards requiring education in informatics in pharmacy curricula were introduced in the last 10 years by the Accreditation Council for Pharmacy Education. Mirroring difficulties faced by other health professions educators, implementation of these requirements remains fragmented and somewhat limited across colleges of pharmacy in the US. Clinical practice and workforce metrics underline a pronounced need for clinicians with varying competencies in health informatics. In response to these challenges, a multitiered health informatics curriculum was developed and implemented at a college of pharmacy in the Southeast. The multitiered approach is structured to ensure that graduating pharmacists possess core competencies in health informatics, while providing specialized and advanced training opportunities for pharmacy students, health professions students, and working professionals interested in a career path in informatics. The approach described herein offers institutions, administrators, faculty, residents, and students an adaptable model for selected or comprehensive adoption and integration of a multitiered health informatics curriculum.

From the one-of-these-things-is-not-like-the-other research file, this gem of a study was heavily influenced by the psych titans who I was fortunate enough to collaborate with. I learned quite a bit, including the term cosmetic psychopharmacology. I rationalize this occasional stream-adrift type of research with the findings of a 2015 MIT Sloan Management Review piece which concluded that professionals with diverse (Twitter) networks who get out of their comfort zones and gain exposure to different processes were more likely to surface innovative ideas. That’s my story. I am sticking to it. 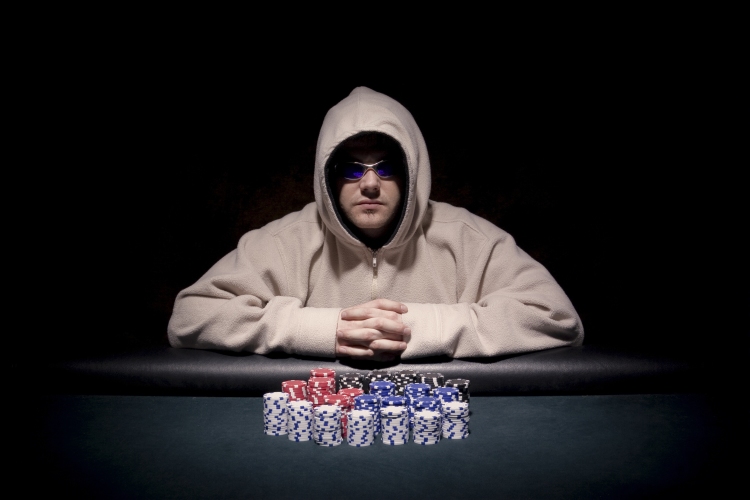 Use of neuroenhancers has been studied in groups ranging from students to surgeons; however, use of cognitive and performance enhancing medications (CPEMs) to improve performance in poker has remained largely overlooked. To assess the use of CPEMs to improve poker performance, a survey of poker players was conducted. Participants were recruited via Internet poker forums; 198 completed the online survey. Approximately 28 % of respondents used prescription CPEMs, with the most commonly used including: amphetamine/dextroamphetamine (62 %), benzodiazepines (20 %), and methylphenidate (20 %). CPEMs were used in poker to focus (73 %), calm nerves (11 %), and stay awake (11 %). Caffeine (71 %), as well as conventionally counter-intuitive substances like marijuana (35 %) and alcohol (30 %) were also reported to enhance poker performance. Non-users of CPEMs were dissuaded from use due to not knowing where to get them (29 %), apprehension about trying them (26 %), and legal or ethical concerns (16 %). Respondents most frequently acquired CPEMs via friends/fellow poker players (52 %), or prescription from physician (38 %). Additionally, greater use of CPEMs was associated with living outside the United States (p = 0.042), prior use of prescription medications for improving non-poker related performance (p < 0.001), and amateur and semi-professional player status (p = 0.035). Unmonitored use of pharmacologically active agents and their methods of acquisition highlight safety concerns in this cohort of poker players, especially among non-professional players. The current state of guidance from national organizations on CPEM use in healthy individuals could impact prescribing patterns.

The summary and book chapter below represent our contributions to this text. The topic remains an area I have great enthusiasm about and high hopes for, when executed well. 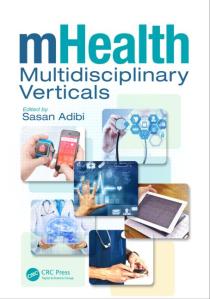 Irrational use of medications is a global challenge, with the World Health Organization (WHO) estimating that “more than half of all medicines are prescribed, dispensed, or sold inappropriately”. This situation is exacerbated by half of all patients not taking their medications as intended, with non-adherence rates in disorders like schizophrenia reaching over 70%. Medication non-adherence and polypharmacy (i.e., use of multiple medications) are massive barriers to optimal medication management and are the source of substantial health and financial costs. Mobile health (mHealth) offers myriad methods to address these challenges, ranging from simple text message reminder systems to ecological momentary interventions (EMIs) to leveraging interface versatility for eHealth literacy solutions. In this chapter, current scientific evidence will be used to explore the role of mHealth in enhancing pharmacy-related outcomes in varying healthcare settings and diverse populations. Current and future developments in mHealth will be explored through the lens of select disease states and patient populations. 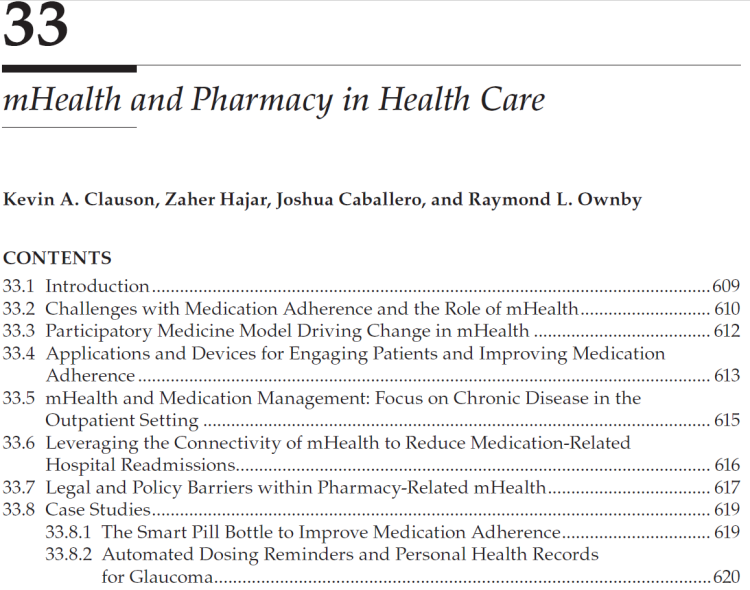