I already miss the sound of the techno music from the Walter E. Washington Convention Center at the 2010 mHealth Summit.  Because I’ve seen a number of questions about what mHealth is, here is my preferred definition from lecture courtesy of @mHealthAlliance: “the use of mobile devices and global networks to deliver health services and information”.  One reason I like this definition is its emphasis on the ‘network’ piece.  It allows for a much broader application.  I understand the desire by some for the term uHealth (u=ubiquitous) and others, like one presenter at AMIA 2-3 years ago from Rockefeller, who yearn for everything to eventually just be ‘health’.  While recognizing that the types of labels like mHealth can definitely be problematic in the long-run, they also can be really useful in the short term for conveying a basic context, getting people to the table, and creating rallying points…which brings me to my next point.  One of the oft-parroted comments of the Summit was that there was too much hype about mHealth.  Unfortunately the word ‘hype’ was being used interchangeably with ‘excitement’ in many cases.  Of course mHealth isn’t a panacea and there are serious obstacles to navigate.  But let’s not lose sight of the fact that it is really hard to motivate people, to excite people, and to generate momentum…and mHealth is accomplishing those things.  So please let’s not be so terrified about overpromising and under-delivering that we squash genuine enthusiasm.  Of course there are speed bumps and as @joncamfield noted, there are definitely some mobile parlor tricks to be wary of out there (he also had the fantastic idea of an implementer track for next year).  In the interest of being fair and balanced, here is an example of a public health/mHealth app featuring augmented reality that may mean well but has questionable execution [EDIT: yes, the video below is for an actual app].

Onto the conference proper…David Aylward, Executive Director of the mHealth Alliance, began with a pseudo-demo of wearable body area networking for basic vitals.  Side note: Aylward closed the conference while wearing a Bugs Bunny tie that I speculated was an ode to Ted Turner and his Cartoon Network.  This remains unconfirmed.  Slightly more relevant, the conference was livestreamed and h/t to @planetrussell who noted that videos from the stream are starting to appear in various YouTube channels. 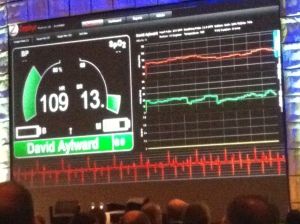 The first two WOW moments of #mhs10 for me included the announcement of the 2011 NIH Summer Institute on mHealth Research, which will provide specialized training opportunities for 25 researchers. 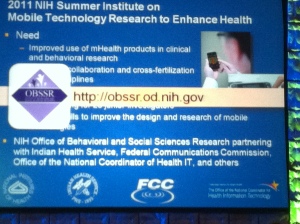 The second was during a panel presentation by @JoshNesbit in which he shared a word cloud of the tweets from Haiti following the earthquake.  The wow moment was when he pointed out that the second most tweeted word was ‘please’.  That revelation definitely gave me pause. 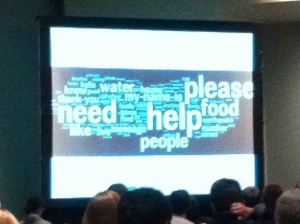