Like many people, my first exposure to blockchain technology was through the cryptocurrency Bitcoin. Then a colleague who was a visiting lecturer in Estonia reached out to me and said I should look into what that country was exploring doing with digital identity, through their plans to use blockchain technology (ok, technically not blockchain). But that aspirational version of proposed distributed ledger technology seemed to map nicely to some previous work we had explored with the WHO around counterfeit medications and in the US with the DSCSA. Over the next months, several students and I started exploring that line of inquiry. 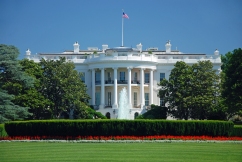 The following year, I was honored to be invited to the White House for a Precision Medicine Initiative Workshop co-hosted by the White House OSTP and Stanford Medicine X. I’ve detailed that Workshop previously, but I didn’t really go into detail about what our specific small group did there as it represented several concurrent (and ongoing) works in progress. Our group self-organized to explore if blockchain might help with challenges around bidirectional sharing of clinical trial data. At the time, I didn’t know very many people in healthcare trying to leverage the potential of blockchain, so this event was fantastic for introducing me to the blockchain-related work being done in tech, pharma, and by the IEEE.

A relatively small blip on the timeline, but notable for being the first (or among the first) main stage presenters at a health conference in Nashville advocating for the utility of blockchain in healthcare. All of whom but one, I think, are in completely different positions now.

While Distributed Health would be the first blockchain conference focused on healthcare the following month, this design-a-thon was a different sort of first and helped create or solidify collaborative efforts that are still productive today.

On the heels of Blockchain Disrupt, one of our collaborators (and fellow DISRUPT attendees; pictured above), the excellent Dr. Tim Mackey, presented our work on the applicability of blockchain for SSFFC medications at Stanford Medicine X. This work represented the efforts of orgs with very complimentary strengths.

This virtual event was an extension of some of the IEEE’s early efforts for blockchain specific to healthcare.  I was invited to develop a challenge tied to healthcare and learned a lot in overseeing it.

The Blockchain Lectures (October 2016)
Much less grandiose than it sounds, this is when I formally introduced blockchain for healthcare lectures into my Consumer Health Informatics courses. In this semester’s offering I am looking forward to using Cryptokitties as a vehicle to teach about the Ethereum Network, gamification, and genetics. 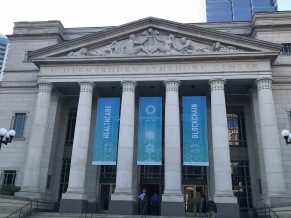 The aforementioned first blockchain conference dedicated to healthcare. This really was a groundbreaking event. The Dean of our College of Pharmacy at my University attended Distributed and saw the potential very early on. Bonus: it was held in my new-ish home of Nashville.

Nashville is a healthcare mecca and a HIT mecca, but its tech community has really been thriving of late. This Meetup, often sponsored by Hashed Health, generates a strong and diverse turnout every month.  If you only attended one Nashville Blockchain Meetup all of 2017…I’d probably have recommended the one with Charlie Shrem. But if you chose two: the one with Corey, Giles, and I about the pharmaceutical industry was a good time.

We had been working with the fine folks at Hashed Health on a number of endeavors and made it official by joining their Consortium. It has been an extremely positive and productive partnership to date. Our Dean and leadership demonstrated significant foresight in identifying the potential out of the gates and in allocating resources during the many months leading up to this step. Details here.

The prospect of joining the Editorial Board of this journal was exciting, in part because of the caliber of the other members that had already been assembled on the Board and also due to the opportunity to help fill the void of a dedicated, peer-reviewed vehicle for dissemination of what works (and what doesn’t work!) with blockchain for healthcare. January 2018 will be the journal‘s premier issue.

The word potential is used frequently to describe blockchain (including by me), so it is particularly rewarding to try and actually build something. A lot of people at Lipscomb University and many folks at Hashed Health worked to make this platform a reality.  Its aim was to develop a means to verify graduation credentials using blockchain technology. It is described here.

Blockchain in the Peer-Reviewed Literature (March 2018)

Our first couple of journal articles on blockchain have been published. These both appeared in the premier issue of Blockchain in Healthcare Today. Leveraging Blockchain Technology to Enhance Supply Chain Management in Healthcare was a deep dive into the health supply chain. Pragmatic, Interdisciplinary Perspectives on Blockchain and Distributed Ledger Technology: Paving the Future for Healthcare was a fantastic effort in conjunction the the HIMSS Blockchain Working Group and included co-authors from industry, technology, healthcare, and academia.

Sometimes we get caught up in our own echo chambers. So it was great to travel to Austin to share and learn about the applicability of blockchain technology in navigating challenges with supply chain management. I focused on the DSCSA for medications as well as medical devices and learned a lot from others in other sectors outside of health care (e.g. energy).

Blockchain in Education (May 2018) 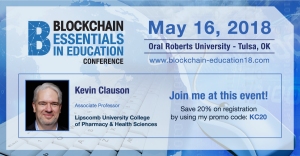 Excited to keynote about the work we did with Hashed Health on creating a platform for degree verification with Ethereum, blockchain career opportunities for students, and the verdict on the first couple of runs using CryptoKitties as a hands-on assignment for pharmacy and health care informatics students to learn about genetics, gamification, and the Ethereum transactional ecosystem.

Blockchain in Healthcare Workshop (May 2018)

A 1.5 day blockchain workshop focused on healthcare co-hosted by the University of California – San Diego and the IEEE. Practical and professional development on the healthcare applications of blockchain technology in a workshop environment. Looking forward to presenting and engaging!

There are quite a few omissions in the above timeline, including some of the more interesting ones that are dictated by NDAs or good judgment. Similarly, some of the consulting I have been contracted to do in the blockchain space has been among the most interesting of my career. I continue to work with organizations like IEEE and HIMSS in SMEs and WGs and look forward tackling problems in this area going forward!