X Gonna Give It To Ya 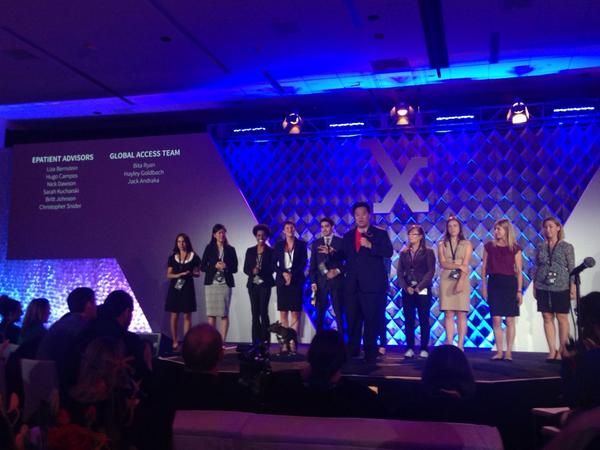 A gentle street poet named Earl Simmons once penned the words, “X Gonna Give It To Ya”. I can’t remember the next line of the stanza, but I think it may have been, “If You Let it”. He may very well have been talking about Stanford Medicine X, because you kind of have to be open to what it has to offer. But if you are, it will deliver quite an experience.

As usual, #MedX started well before the conference proper with the pre-conference which generated an outpouring of tweets and other activities leading up to its kickoff this year and throughout the conference. If there is any doubt, the fine folks at Symplur have put that question to bed.

I know I said it’s not about the numbers … but here are the numbers at #MedX 🙂 http://t.co/4lSucHS03M

UMQ (Uncomfortable Moment Quotient)
UMQ = number of total conference sessions/number of instances in which a question or comment makes speaker or audience (in-room + virtual) visibly uncomfortable. One of the things that separates Medicine X from most other conferences I attend is that it has a remarkably high number of instances in which people become visibly uncomfortable as a result of a presentation or (more likely) a Q&A. I had many conversations about this observation in 2014. To be clear, this is a good thing. The truth can be uncomfortable. Health is messy. Health care may even be messier. So kudos to Dr. Larry Chu (@larrychu) and everyone involved for the way Med X is structured to almost cultivate the UMQ as a mechanism for addressing the tough problems we face in health care. Last year the UMQ was high as well, but at times there was an edge to it that was…not helpful. Through planning and design, it seemed this year had another remarkable UMQ, minus the sometimes-nasty edge.

How Quickly the Uninitiated Become The Learned
It is a-maz-ing to me to reflect back on just a few years ago when I saw the first inclusion of epatients, then epatient scholars, then epatient advisors at Medicine X. The same people who blew me away with their bravery in sharing their struggles with their health, were also as vulnerable as an exposed nerve at times. To see what has really been a transformation of some of them over the years has been part of the joy of being a part of this conference experience. (By intent, Stanford Medicine X is a conference experience). I still remember the first time I heard Sarah Kucharski (@AfternoonNapper) speak and was blown away by her voice (her ‘capital V’ voice, although her ‘lower case v’ voice is quite nice as well). To see her grow in her role and  (sometimes quiet, sometimes not-at-all quiet) self-assuredness has been pretty cool. Similarly, seeing others like Britt Johnson (@HurtBlogger) evolve from leader-as-blogger to also taking on the mantle of IRL leader has been encouraging to watch. One other neophyte-to-leader journey has really struck me as well, that of Chris Snider (@iam_spartacus). This is a guy who I thought of as a podcaster who talked about gaming, diabetes, and various tech geekery. I feel like he has really developed this Voice as a curator/narrator hybrid for #MedX and for the broader conversation. Almost like an human-version of Storify. Oh, and he also wields surprising power. I saw firsthand how the power of his tweets could motivate people to walk up to physicians and ask them about their socks. #truestory

400% Increase in Pharmacist Participation
I don’t have the access or authority to release the actual attendance figures for pharmacists at Med X, so I thought I would guesstimate. I mean, if only 10-35% of ACTUAL MEDICAL CARE is based on level 1A evidence (per @drnigam and various other sources, although technically not Cochrane), I can get away with this guesstimation, right?

Whatever the actual figures may be, there was definitely a stronger presence for pharmacy this year. From mentions of the role of the clinical pharmacist at Stanford Coordinated Care by its Co-director Ann Lindsay to multiple panel, plenary, student leadership, and first-time attendee roles by pharmacists and pharmacy students (@kellygrindrod, @rnovak_pharmd, @nicholasvu, @asapola_pharmd), it was encouraging to see and hopefully a sign of things to come. [h/t @nickdawson] Pharmacy has a lot to offer and (unfortunately) is the second best-kept secret in health care.

Poolside Backchannel of the Backchannel
I read a book a few years ago titled, The Backchannel: How Audiences are Using Twitter and Social Media and Changing Presentations Forever. I also use Twitter quite a bit and actually consider it to be my most useful social media tool for professional development and connections. So I thought I had a fair grasp of the use of it as a “Backchannel”. However, one  evening a group of Med X student leaders and epatients taught me that there is such a thing as the Backchannel of a Backchannel. That’s part of the beauty of being in academia. There is no shortage of the steady stream of new ideas and youthful enthusiasm that come in from new students and learners.

Science-y Stuff
I love the plenary sessions, but I am always going to look forward to the parallel, research-track sessions. I had it narrowed down to my top two favorites for 2014, but couldn’t decide so I am going to mention both. The first is the eHealth and Personal Health Records Panel with Nigam Shah [abstract], Perry Gee [abstract], Anne Townsend [abstract], and Floor Sieverink [abstract]. {by the way, all abstracts also have the Twitter accounts at end} Shah made a compelling case for mining EHRs for practice-based recommendations, and the others had really interesting takes on PHRs and the patient experience.

The Health and Human Behavior session was my other favorite as I believe their theme of health behavior change + technology is at the core of so much of what we are trying to do to improve outcomes. The presenters were John Hixson [abstract], Shiyi Zan [abstract], Sean Young [abstract], and Ken Yale [abstract]. Hixson used  PatientsLikeMe in a population you wouldn’t necessarily expect: 50 year old (average age) US veterans with epilepsy. Zan explored the use of social media for healthcare in adolescents and young adults. Young started with 550 million tweets and ended with a more manageable 2.1 million tweets to evaluate for HIV-related risk communications. And Yale looked at 5 years worth of data on the impact of incentives in promoting health behaviors. You owe it to yourself to check out their abstracts.

Best Poster
The fact that I had followed Paul Grant for years and even have a screenshot of one of his tweets from a 2009 mHealth Dubai conference in a slidedeck legit has nothing to do with this selection. Although I can’t imagine it hurts. More info on his fascinating work here. h/t @engagmentstrat

Visceral Reactions aka The Good Kind of Stomach Punch
There were a couple of jaw-dropping and dusty room plenary presentations I want to share. The first was the E-NABLE system. Basically it’s: 3D printing + goodwill + community = affordable prosthetic hands for kids.

The other was the introduction to the current version of Jerry The Bear. Great cause. Great motivation. Fingers crossed they keep plugging away and have success on Indiegogo. They are trying to “Reinvent diabetes education through PLAY”.

Back to the airport
Today I leave for CTIA Super Mobility Week. I’ve never been to it. It is at the other end of the conference spectrum from Medicine X in that is massive and industry focused. I am uncertain exactly what to expect. I am certain that no other conference has what MedX is gonna give to ya.

(I maintained a list  of these last year, so I will try to do so again as able)

From a medical student and fellow Gunner (@TheBiopsy)

From co-host of #hcldr chat (@Colin_Hung)

From a communications professional (@MichelleLBrandt)

From a mother of child with Cystic Fibrosis [Storify] (@ekeeleymoore)

From a PhD candidate with MedX bike tips [@jsperber]

From an epatient & paramedic (@prostheticmedic)

From an epatient/podcaster & a Gaggle of Google voices (@iam_spartacus)

From an epatient with T1DM (@txtngmypancreas)

From an epatient with Crohn’s (@CarlyRM)